‘a man, an island, and music that moves the world’

Shining Night offers a glimpse of the life and music of one of the greatest living choral composers, Morten Lauridsen, a National Medal of Arts recipient who spends summers on a remote island in the San Juan Archipelago and whom musicologist Nick Strimple distinguishes as ‘the only American composer in history who can be called a mystic’.

Exploring the relationship of art, nature, and spirituality, Shining Night reveals the composer through the lens of his love for the natural world together with his passion for music and poetry, interwoven with commentaries from composers, conductors, singers, and friends.

Filmed between 2010-2011 in San Francisco, Los Angeles, Aberdeen, Scotland, and Waldron Island, the documentary conveys the richness and breadth of the award-winning composer’s life, with a soundtrack featuring his masterworks- Lux Aeterna, O Magnum Mysterium, Nocturnes (including Sa Nuit D’Ete, Soneto de la Noche, and Sure On This Shining Night, Madrigali and Dirait-on.

Winner of four Best Documentary awards since its 2012 premiere in Palm Springs, the film is screened throughout the world, often hosted by choral festivals and choirs featuring the film in a program of Lauridsen music.  Shining Night, co-produced by Michael Stillwater and his wife Doris Laesser Stillwater, offers a rare encounter with music that inspires humanity, conveying a spiritual transmission to singers and audiences alike.

Sure On This Shining Night
by Morten Lauridsen 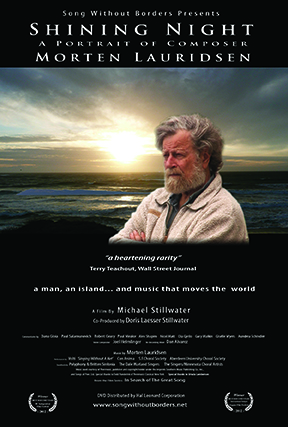